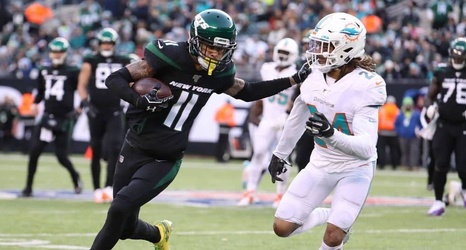 With December sending so many travelers home for the holidays, it’s a shame Robby Anderson didn’t visit his apparent new dwellings of the stands near the end zone on Sunday afternoon.

A visit to the MetLife Stadium seats wasn’t in the cards for the New York Jets receiver, but he nonetheless visited the end zone for the third time in the past four weeks. His 26-yard touchdown catch from Sam Darnold not only opened New York scoring, but kickstarted an afternoon that featured 116 yards on seven receptions.

The Jets won their fourth game over their past five, topping the Miami Dolphins, 22-21.