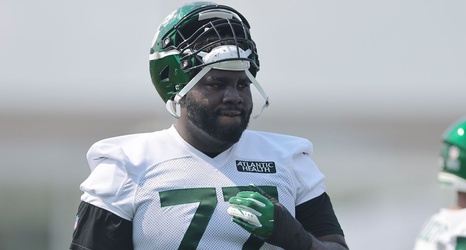 FLORHAM PARK, N.J. -- New York Jets right tackle Mekhi Becton is having an MRI on his surgically repaired right knee after limping off the practice field Monday in apparent pain.

The injury doesn't appear serious, according to the Jets, but any time lost is potentially significant because Becton has battled weight and conditioning issues.

"As of now, it doesn't seem like a big deal, but -- knock on wood -- hopefully that stays the case," said coach Robert Saleh, who described the MRI as precautionary.

The 2020 first-round pick injured his right knee in the 2021 season opener and never played again even though the team initially called it a four- to six-week return from surgery.