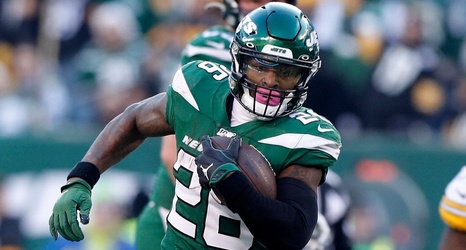 Le'Veon Bell of theJets runs the ball during the fourth quarter against the Steelers at MetLife Stadium on Sunday. Credit: Jim McIsaac

The color scheme kind of resembled the Pittsburgh Steelers’ black and gold.

“I wasn’t doing it to be petty or nothing,” Bell said. “I thought it would draw a little attention.”

This wasn’t just another game for the running back. The Jets were facing his old team.

The Steelers held him in relative check — 25 carries for 72 yards, four receptions for 21 yards.