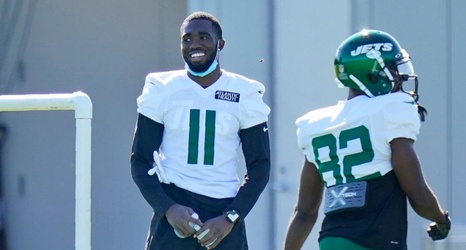 The Jets' Denzel Mims stand off to the side during a practice at training camp in Florham Park, N.J., on Aug. 20. Credit: AP/Seth Wenig

Denzel Mims is cleared to make his NFL debut, but it looks as if the Jets again will play a game without their full complement of top wide receivers.

Mims was activated from injured reserve, clearing the way for the rookie wideout to play when the Jets face the Bills at MetLife Stadium on Sunday, but Jamison Crowder was downgraded to doubtful because of a groin issue.

The Jets had hoped their top three pass catchers would be on the field together for the first time this season, but that probably won’t happen now; Braxton Berrios will replace Crowder if he can’t play.