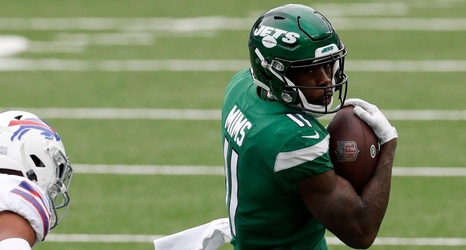 Denzel Mims of the New York Jets runs the ball after a reception during the second quarter against the Buffalo Bills at MetLife Stadium on Oct. 25, 2020. Credit: Jim McIsaac

Denzel Mims has made a quick impact for the Jets, becoming a go-to target in a short period of time.

The 6-3 rookie receiver only has 13 catches. But he’s making tough, contested grabs and showing glimpses of not only what could have been if Mims was healthy this season, but also what could be for the Jets.

Mims missed all of training camp, weeks of practice, and the first six games with hamstring injuries in both legs.