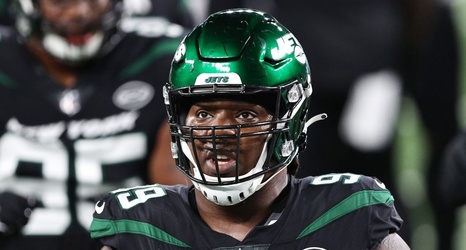 Steve McLendon looks on during warm ups before the Jets play the Denver Broncos at MetLife Stadium on October 01, 2020. Credit: Getty Images/Elsa

After the loss to Miami, who was the first Jet shown the door?

Nose tackle Steve McLendon was. The Jets agreed to send McLendon and a 2023 seventh-round pick to Tampa Bay for a sixth-round pick, a league source confirmed. McLendon will be reunited with Bucs defensive coordinator Todd Bowles, his former head coach with the Jets.

In the last six days, the Jets have waived Le'Veon Bell and traded their most respected locker-room leader.