Jets' Mekhi Becton will have surgery on his knee, could miss 4-8 weeks 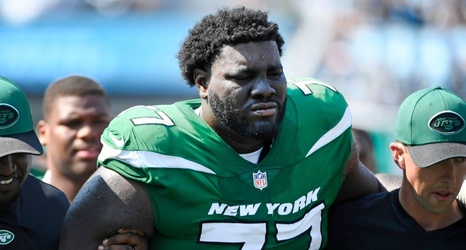 Mekhi Becton of the Jets is helped off the field after being injured during the third quarter against the Panthers at Bank of America Stadium on Sunday in Charlotte, N.C. Credit: Getty Images/Mike Comer

Mekhi Becton has opted to have surgery on his knee, according to ESPN, and could miss 4-8 weeks.

This was the expected outcome for the Jets starting left tackle, who sought a second opinion after suffering a dislocated kneecap in last week’s loss to Carolina. Becton was carted off the field and got emotional on his way to the locker room.

Robert Saleh said Becton would miss "a minimum of four to six weeks" if he decided not to have a procedure.