Jets fight back in second half, but red zone failures doom them in tight loss to Vikings 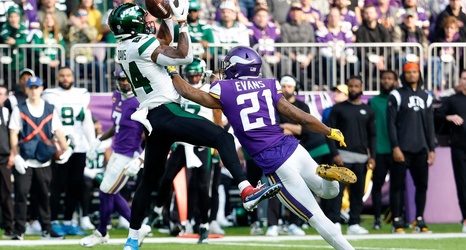 MINNEAPOLIS -- Justin Jefferson's touchdown catch with 8:33 left gave the Minnesota Vikings enough of a lead to hang on for a 27-22 victory despite a relentless rally by the New York Jets on Sunday.

Camryn Bynum's interception at the 1-yard line with 10 seconds left finally sealed it for the Vikings (10-2), who completed a four-game sweep of the AFC East in their typical nail-biting fashion.

Mike White, who was picked off twice, was 31 of 57 for 369 yards in his second start this season for the Jets (7-5). He scored on a fourth-and-goal sneak from the 1 to pull within five points with 6:45 to go after a replay review reversed the initial ruling that he was stopped short.