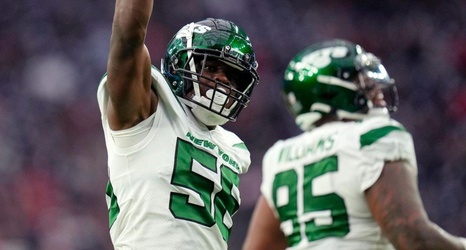 HOUSTON — Zach Wilson wasn’t sharp in his return and he gave the Jets a scare when he appeared to tweak his knee in the second half.

But Wilson did just enough, and the defense did more than enough to end the Jets’ three-game losing streak.

The defense sacked Tyrod Taylor five times and came up with a huge fourth-down stop late in the fourth quarter to help lift the Jets to a 21-14 victory over the Texans Sunday at NRG Stadium.

Wilson missed the last four games with a sprained right knee. He threw a what-were-you-thinking interception on his second series, and the Jets had minus-7 passing yards heading into the final drive of the first half.