Jets are the wrong team to search for Myles Garrett supporters 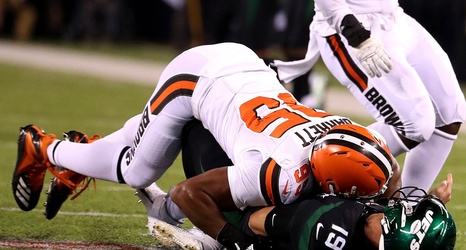 Myles Garrett ended the season of backup quarterback Trevor Siemian with two late hits in September, so it’s no surprise the Jets weren’t exactly defending him Friday over his helmet-wielding assault of Pittsburgh’s Mason Rudolph.

Garrett was suspended indefinitely — and at least for the remainder of this season — for the dangerous melee at the end of the Browns’ victory Thursday night over the Steelers.

“That was crazy. Obviously I don’t know exactly what happened, what was said in the pile between Myles and Mason. But he obviously took it too far,” said Le’Veon Bell, who played for the Steelers from 2013-17 before sitting out last season in a contract dispute.