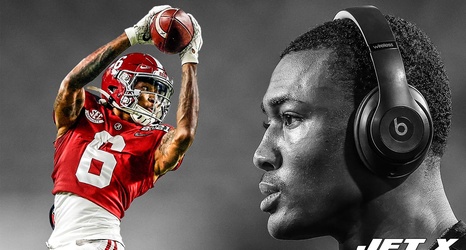 He’s explosive, smart and catches everything thrown his way. He conducts himself with class and in a manner that rubs off on his teammates. He won this past season’s Heisman Trophy and capped off a national championship with 215 yards and three touchdowns on 12 receptions—all while missing most of the second half.

His name is DeVonta Smith, and he’s everything an NFL general manager would want on the roster and in the building.

He’s also a guy that shouldn’t impact the New York Jets 2021 NFL draft strategy. At the very least, his outrageous title game performance shouldn’t change anything about what the team does at No.