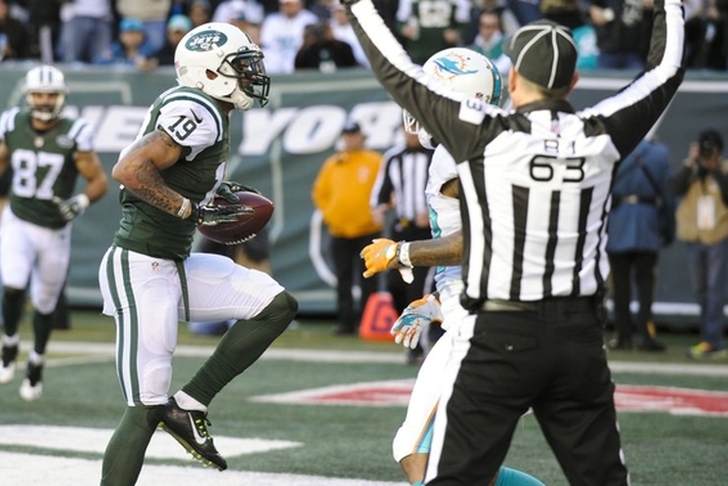 The New York Jets snapped a two-game losing skid, winning just their second game in six tries with today's 38-20 defeat of the AFC East rival Miami Dolphins. The Jets move to 6-5 with the win, while Miami falls into the danger zone of the AFC playoff chase at 4-7. Here's some notes, quotes and observations from New York's big win.

Jets QB Ryan Fitzpatrick cropped his beard for his 33rd birthday this week and turned in his best performance of the season, going 22/37 for 277 yards and four touchdowns. Last time Fitzpatrick trimmed his beard, he threw six touchdowns in a win for the Texans in 2014.

WR Brandon Marshall had his best game in a New York uniform, catching nine balls for 131 yards and two scores. It's just his second 100-yard performance over the past six games.

WR Jarvis Landry had a heck of a performance in a losing effort, catching 13 passes for 165 yards and a touchdown. Sunday was his second 100-yard day of the season.

"We needed to right the ship. This was an important one for us. That said, it makes next week's more important." -- Jets QB Ryan Fitzpatrick

"What you saw today was our potential, what we're capable of doing. Now the mission is to do it every play, every game and we'll see what happens." -- Jets WR Brandon Marshall

New York effectively saved its season on Sunday, keeping pace with the Texans, Colts, and Chiefs at 6-5. The Jets currently sit in the #8 slot due to tiebreakers, but tiebreakers likely won't matter if today's win is the start of a roll. The Jets play just one team with a winning record in their final five games (Patriots, Week 16). They've got a legit shot at finishing 10-6.

With a win, Miami could have mucked up the AFC Playoff chase even further, joining the Jets at 5-6 while sitting just a game behind the field for the #6 spot. Now, Miami has lost four of five and will need a miracle at 4-7 just to finish at .500 or better. If they can't find a running game and soon, they may be headed for a very high draft pick next summer.