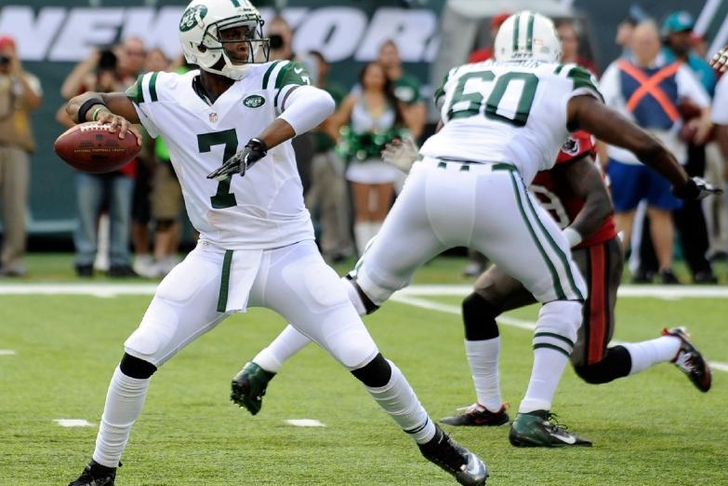 Questions surrounding the New York Jets’ quarterback situation have been in everywhere so far this season. No matter what happens from here on out with the Jets, there’s no doubt that Geno Smith should be the starting quarterback going forward.

If nothing else, the Jets have a knack for making headlines, even if it’s for all the wrong reasons. Were people really that surprised when the reports came out that Smith could actually be competing for the starting job with QB Matt Simms? Regardless of whether that was even a possibility before Mark Sanchez got hurt, the Jets found still another way to make the front page.

It’s clear that Sanchez isn’t the answer or the future. He’s been put on the IR and won’t be eligible to play for 8 weeks, and the team has seemingly moved on from Sanchez - rightfully so. All in all, Smith needs to remain the starter for the Jets this season.

Smith, on the other hand, has been intriguing so far through his first two games. He played a very solid game against Tampa Bay, but was subpar against New England. That being said, the Jets need to stick with him as the season goes on if they want to ensure his future success with the team.

One thing that seems to be forgotten about Smith is that he’s a rookie quarterback. He’s entering his third game. Even though he’s been all over the media during the offseason and seems to relish that opportunity, he’s still learning the ins and outs of the league. It’s not easy for every rookie quarterback to be RGIII, Russell Wilson, or Andrew Luck.

The expectations of the fans in New York seem to have gone over the top thanks to the success of other rookie QBs. Those same high expectations could also come from the frustration of watching Mark Sanchez the last few seasons. Wherever it’s coming from, the fans need to be patient with their quarterback and allow him to grow.

If that’s not a convincing enough reason to stick with Smith, then how about this: where else would the Jets go from here? They invested quite a bit in Smith, and it wouldn’t make sense for them to just bench him this season after the Jets' quarterback battle turned into such a circus over the summer.

At least with Smith in the lineup, there can be some hope for improvement and a bright future. Take him out of the equation, and the Jets would find themselves in yet another tough spot.

No one’s expecting this team to be a playoff contender or make any noise in the AFC East, so why pull the plug on a rookie quarterback who’s shown enough to be a starter for this team?

Do the Jets really expect Matt Simms to do anything more than Smith? No one’s knocking Simms, who played exceptionally well during the preseason, but would it really be fair to ditch Smith and throw him into the mix this early in the season?

The Jets will play the Bills on Sunday, and Smith will be going up against fellow rookie QB EJ Manuel. Even if Smith tanks on Sunday, Jets nation should be all in with him. If they want to see this franchise turn around sooner rather than later, they have no other options.