Offensive Players the Jets Should Target in the First Round 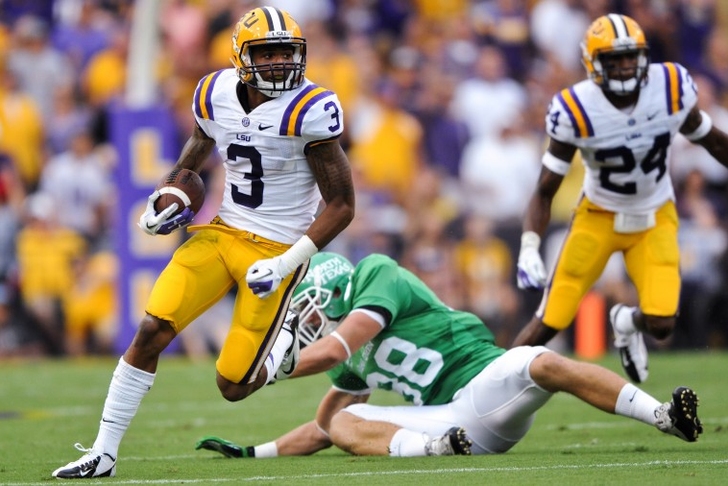 The Jets have had a very busy offseason, but their work is just getting started. They’ve already let go of Mark Sanchez and Santonio Holmes, and brought in guys like Michael Vick and Eric Decker, and the shuffling won’t stop there. The Jets are one of those teams that are an offseason away from taking a big step forward – now that free agency is more or less over, the next step is the draft.

The Jets will look to be just as busy during the draft as they were during the thick of free agency. The Jets will have a total of 12 picks spread around the seven rounds of the draft. They received four compensatory picks; one in the fourth round and another three in the sixth round.

12 picks is good for any team, but especially for a Jets team that needs to add depth and skill at multiple positions. That being said, their most important pick will be their very first one.

The Jets have the 18th pick in the first round, and there will be plenty of talent there for them to consider. First, the team needs to identity what they need the most.

It was clear last season that the Jets needed offensive weapons, so it makes sense for them to target a receiver - and this draft has no shortage of talented receivers.

Sammy Watkins from Clemson is considered the top receiver in 2014 draft, but he likely won’t be available at the 18th pick. The most realistic receiving prospect at that spot would be LSU’s Odell Beckham Jr. Standing at 5-11 and 198 lbs., Beckham Jr. possess great speed, playmaking ability and has what it takes to succeed at the next level.

Beckham Jr finished his junior season with 1,152 yards and eight touchdowns. He also had a solid combine as well, running a 4.43 40-yd dash, registering a 38.5 inch vertical, and reaching nine feet and six inches on his broad jump.

Beckham Jr. will likely be the top option available for the Jets, but if not though there are other options available. Brandin Cooks from Oregon State is another viable and realistic option for the Jets to look at with their 18th pick. Very similar to Beckham Jr. at 5-10 and 189 lbs., Cooks has explosive feet and a great burst as he showed in his 4.3 second 40 yard dash. Cooks also took home the Biletnikoff Award in 2013 as the nation’s top receiver.

The obvious weakness for both of these players is their height. They both stand under 6’0 and neither have the ideal strength, but they both have all the athletic ability they need to become top-notch receivers at the next level.

A more interesting prospect could be Penn State’s Allen Robinson. He’s not expected to go as high as 18th; but Robinson has flown under the radar a bit throughout the draft process and could be a sleeper in this draft. Standing at 6-3, 220, Robinson has a little more of an ideal receiver’s size. He possesses great athleticism and physicality in the air and on the ground. The Jets need a player capable of making plays on his own with the ball, and Robinson proved he can make that happen as the focal point of a young Penn State offense. Robinson doesn’t have the best speed and vertical leap and has a tendency to telegraph his moves, but he has as much upside as any other receiver in the draft.

Looking at the still-raw Jets offense, it’s imperative that they look for offensive weapons in the draft. It’s in their best interests to target one of these talented receivers, and pairing any of them with Eric Decker could make for a very formidable offense in 2014.