Jets should be all in with Wilkerson 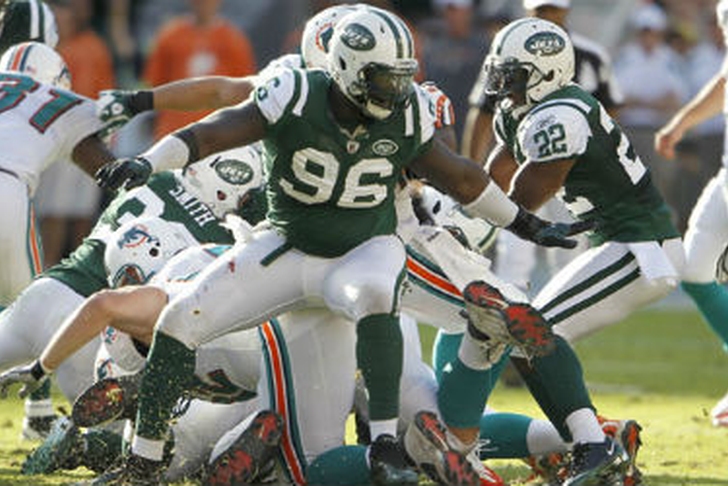 The quarterback position isn’t the only spot with a promising future for the Jets. Defensive End Muhammad Wilkerson has made quite the name for himself, and in his third year and he’s just getting started.

The product from Temple has established himself as a top notch defensive end. Although he’s only he’s only in his third season he has a chance to become one of the best defensive ends in the league.

Last season Wilkerson put together 69 total tackles with 5 sacks and with the departure of Darrelle Revis the Jets have come to rely on Wilkerson to be their defensive leader this season.

Starting his career at Temple, Wilkerson joined a team that had only won a combined 8 games between 2003 and 2007. In his junior season Wilkerson put together 70 tackles with 9.5 sacks. He was seen as a sleeper in 2011 draft and was selected 30th overall by the Jets.

His first two season with the Jets he was an unnoticed defensive end on a bad team. The Jets were subpar the last two seasons which has made it hard for Wilkerson to get any notice, but so far this season he’s getting well deserved attention.

He’s recorded 5 total sacks this season after having 8 total sacks in his first two years. His most outstanding game this season came against the Falcons where he recorded seven total tackles and a sack.

Wilkerson is a rare combination of size and speed and has tremendous lateral quickness for someone his size. He’s also shown the ability to be a tremendous pass rusher in the future.

The Jets have been a little bit of a surprise this year with their 3-3 start. Their win over the Falcons was definitely a shocker and Wilkerson’s anchoring of the defense deserves some credit.

As Wilkerson continues to improve, the team will continue to head in the right direction. Defensive coordinator Dennis Thurman has done a great job with Wilkerson and the rest of this young defensive core in New York.

Wilkerson’s is still on his rookie contract but the Jets need to make sure that they work on a deal to keep him there. The combination of him on the defense and Smith on the other side of the ball could be very promising.

Despite what happens with the Jets this season Wilkerson needs to be held onto for the future. As the Jets move forward he will continue to be a vital part of their defense.