Jets Rumors: 3 Players New York Should Target In The NFL Draft Are... 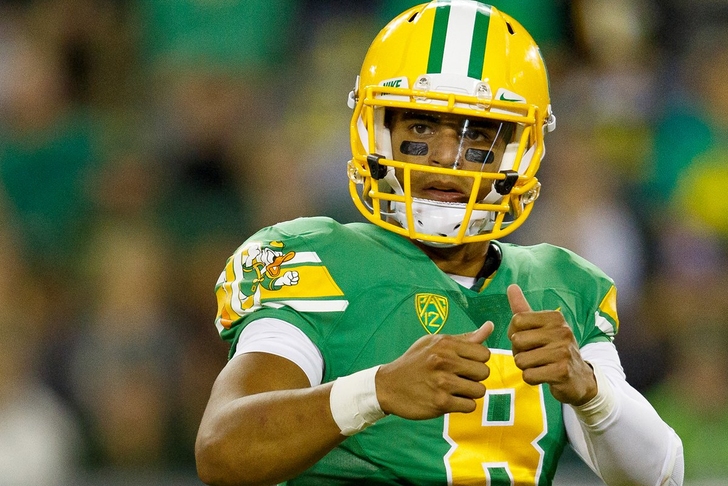 The New York Jets limped through another tumultuous season in 2014, but they've already made several key moves under new leadership - trading for WR Brandon Marshall, signing CB Darrelle Revis - that have them back on the path to the playoffs. Who are they targeting in the draft to help get them over the top? The biggest question mark surrounding this Jets team is their quarterback situation. Geno Smith has shown he's not the answer, and with New York holding the No. 6 overall pick in the draft, they're in range to draft one of the top quarterbacks in the draft. The Tampa Bay Buccaneers, who hold the first overall pick, seem set on Florida State QB Jameis Winston, leaving Mariota for the Jets.

New York needs to find someone they can rely on in the running game to help Chris Ivory, and Gurley could be the steal of the draft if he falls to the second round. The Georgia running back was considered to be the best back in the country – by far – early in the season, but a suspension and torn ACL have him sliding down draft boards. If New York has no questions about Gurley’s knee, he’ll be a dominant force in the NFL from day one.

New York’s linebacking core is in need of inside depth and help stopping the run. Add in a blue-chip prospect, and the Jets could post top-ten finishes in rushing and passing yards allowed next season – putting them in great shape in their quest to make their way back to the postseason. Perryman doesn’t have elite speed or athleticism, but his strength, acceleration, and instincts have drawn comparisons to London Fletcher, and he should be available in the second or third round.