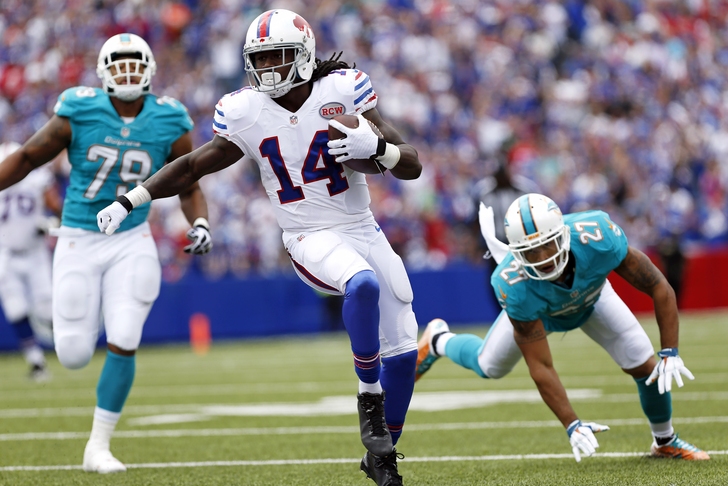 The New York Jets' season finally reached its breaking point on Sunday in their 43-23 blowout loss to the Buffalo Bills at the Meadowlands.

Head coach Rex Ryan bench quarterback Geno Smith after he threw three interceptions in the span during the first 10 minutes of the first quarter. Backup Michael Vick didn't exactly set the world on fire, however, as the Bills easily pulled away for the convincing victory.

Turning Point: Bills kicker Dan Carpenter drilled two field goals in the third quarter to extend a 24-17 halftime lead to 30-17, but the Jets were still technically in the game at that point.

That changed dramatically on the Jets' final series of the third quarter. Vick launched one in the vicinity of WR Jeremy Kerley, only to watch Bills SS Da'Norris Searcy come up with a brilliant pick at the Jets 46. Searcy bolted all the way down to the New York 12, setting up a Kyle Orton-to-Scott Chandler TD connection just seconds into the 4th.

The Bills' lead had ballooned to 37-17 and the boo birds began to chirp once again in New Jersey.

The New York Jets came into Sunday's action with just three takeaways and 10 giveaways (7 interceptions, 3 fumbles). That -7 ratio tied the Jets for third-worst in the NFL heading into Sunday's game.

Five interceptions and two fumbles later, and the Jets almost doubled their takeaway/giveaway ration in the wrong direction at -13 - likely good for worst in the NFL after this week's action.

However, rookie WR Sammy Watkins emerged as a lethal big-play threat on Sunday, averaging over 50 yards per catch. Who cares if he got caught celebrating early in embarassing fashion? He still has the mark of "future superstar" written all over him.

Maybe Michael Vick deserves this in many Jets fans for perhaps signalling the end of the Geno Smith era for the Jets. However, he also contributed to the turnover-fest in New Jersey, so the nod goes to young tight end Jace Amaro for providing a consistent target on an absolute wreck of a day for the Jets.

A special shoutout also goes to RB Chris Ivory for punching it in for two TDs on Sunday, despite rushing for just over three yards per carry. (13 carries, 43 yards)

What’s Next? The Jets head to Arrowhead next Sunday for a tough road matchup with the Kansas City Chiefs. Buffalo will get a week of rest during their bye before hosting those Chiefs on November 9th.