5 WRs The Jets Could Sign To Replace Quincy Enunwa 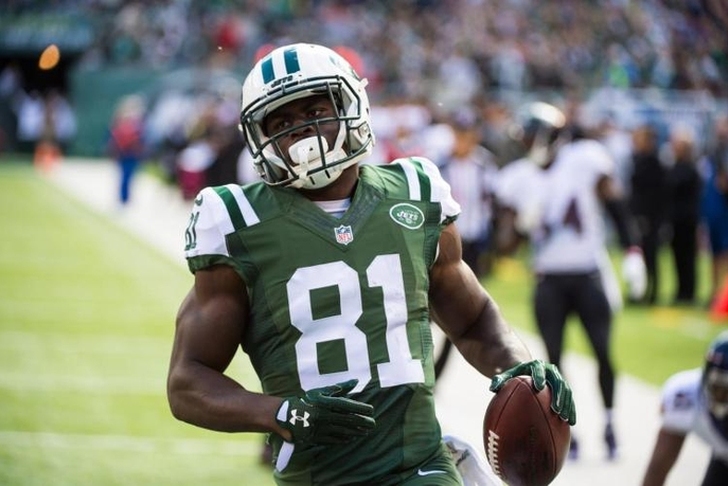 The New York Jets are in line for a rough season and the injury to Quincy Enunwa is just salt in the wound. Enunwa, the Jets No. 1 WR, is out for the year with a neck injury. The Jets' WR corps was already a less-than-stellar one with Enunwa and now the Jets are in need of reinforcements. The Jets could try to stick with several younger players on the roster and throw them into the deep end, but it makes sense for the club to explore a limited free agent market.

The Jets are now down to Robby Anderson, Charone Peake, Jalin Marshall, rookies ArDarius Stewart and Chad Hansen, Lucky Whitehead, Marquess Wilson, Chris Harper and other unheralded players like UDFA rookie Gabe Marks. Marshall, by the way, will be suspended for the first four games of the year and Stewart (third round) and Hansen (fourth round) have battled injuries this year already. Another outside option might be best for the Jets, but another slot option wouldn't hurt either and the Jets just need help at WR. It's not a great group of free agent WRs, but there some players the Jets could add. Another option, and one more likely to produce on the field next year, is for the Jets to wait for roster cuts and snag someone that just misses making a better team. Anquan Boldin is off the list now that the Bills signed him. With all that in mind, here are five players the Jets could sign right now to replace Quincy Enunwa.

It wasn't really a surprise when the Eagles cut Dorial Green-Beckham earlier this offseason. The Eagles drastically upgraded their WR corps this offseason and DGB is firmly in the bust category. He has the size of a WR1, but the effort, focus and attitude weren't there. There's a reason both the Eagles and Titans gave up on DGB so quickly. Still, the Jets are in a position where taking a flier on a player with physical ability is worth trying. It probably doesn't work out, but what's the downside of trying?

There are two main questions around Jackson. Can he even play at a high enough level anymore and does he want to play for the Jets? For some veterans, they'd rather retire than play for a terrible team and get a small payday. The 34-year-old simply might not want to be a veteran presence (on a WR corps that lacks one) for the Jets. After four straight 1,000-yard years from 2011-14, Jackson was limited to just 716 yards in 15 games over the last two years because of injuries. Jackson is not a Pro Bowl player anymore, but he would give the Jets the bigger body they could use to help the development of Christian Hackenberg (if that's the route they take this year).

There's some familiarity here, as Johnson played with the 49ers in 2014 under current Jets OC (and then-49ers WRs coach) John Morton. He's a slot WR option, but the main issue is his injury history. Johnson suffered a meniscus tear last year that cost him the entire season. He's 30 years old, but if healthy, Johnson can help as a veteran option in the slot.

Here's another link to Morton. Rogers was signed by the 49ers in 2016 after lighting up the CFL, but suffered a knee injury. The new regime cut him earlier this offseason and he's yet to sign with a new team. The Jets were one of the teams interested in Rogers before he signed with the 49ers, so there could be a match here. At age 26, Rogers could be a fit as a younger option that has the ability to stick on the roster for more than just a year. At 6-foot-3, 210-pounds, he has size.

Here's another veteran slot option, if that's the route the Jets elect to take. He's recovering from his own injury issues and there's a chance he's still not ready to contribute. If he is recovered from a bout with turf toe, Royal can help in the slot. This is a very similar option to Stevie Johnson, although Royal is much smaller. Their stats aren't that different, as Royal is a year older with 27 more career catches, but fewer yards and TDs.

Check out our New York Jets team page for all the latest Jets Rumors or download the Chat Sports App!