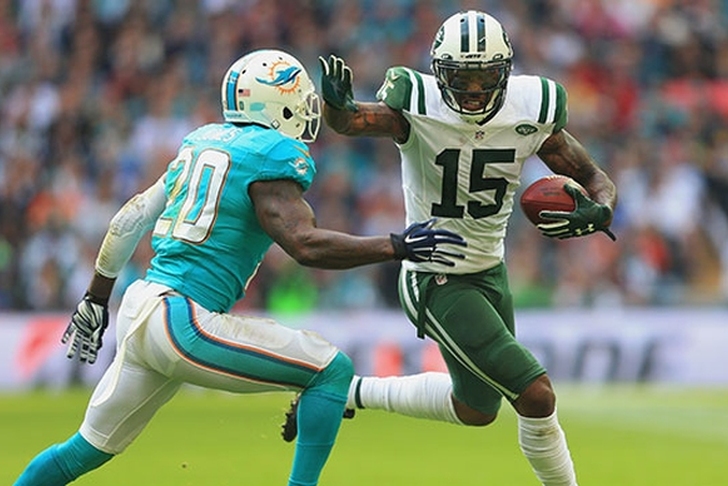 The New York Jets looked dominant in their victory over the Miami Dolphins in London, pushing their record to 3-1 while Miami fell to a disappointing 1-3 mark. Here are three things we learned about each team in the game: The Jets have the best defense in the league

New York's defense doesn't have the notoriety of Seattle's or the flashiness of Arizona's, but they've been better across the board than anyone else in the NFL. They rank first in points allowed per game (13.7), fourth in yards allowed per game (298), and first in takeaways (11). Rex Ryan got the credit for building this defense, but new head coach Todd Bowles has this unit playing at an elite level.

Marshall caught seven of quarterback Ryan Fitzpatrick's 16 completions for 128 of New York's 218 passing yards, which is just a microcosm of how well he's been playing all year. His 272 receiving yards are more than twice as much as anyone else on the team, and he has half (three) of New York's total receiving touchdowns (six). He's the best weapon the Jets have had in a long time, and it's clear they plan to use him every chance they get.

Not only are the Jets 3-1, but they've now beaten a division rival (Dolphins) and one of the favorites to win the AFC (Colts). New England appears ready to run away with the AFC East again, but the Jets have proved they have what it takes to win a wildcard spot. Miami is expected to make changes to their coaching staff following the loss, according to Rand Getlin of NFL Media.

One source cited in the report said that "everyone understands" that the coaches are to blame for Miami's struggles this year because they aren't putting the team in a position to win.

"We've been going out there, and practicing our (tails) off every day, but as players, we're tired of being embarrassed," said one member of the Dolphins in the report. "It isn't the players. We have all the talent in the world."

Miami's first-quarter troubles have killed them

The Dolphins have now been outscored 37-3 in the first quarter this season, by far the worst mark in the league. These slow starts have not only put Miami at a disadvantage for the rest of the game, it has given a ton of confindence to their opponents, allowing them to control the game.

When your leading rusher is a wide receiver that only ran two reverses, you know you have a problem in the backfield. Miami ran for just 59 yards against the Jets, with starting running back Lamar Miller accounting for 26 yards on just seven carries.

Perhaps the problem is that the Dolphins ran the ball just 11 times as a team compared to 44 passes, but that has to do with their lack of production on the ground all season (28th in rush yards per game). Miami's offense is one-dimensional because of it, making them much, much easier to stop.