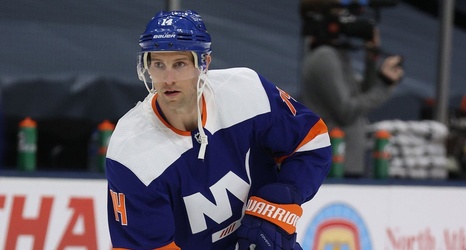 Travis Zajac #14 of the Islanders skates during warmups prior to his game against the Philadelphia Flyers at Nassau Coliseum on April 08, 2021 in Uniondale. Credit: Getty Images/Al Bello

The Islanders’ trade with the Devils last week for Travis Zajac and Kyle Palmieri widely was lauded inside and outside the dressing room, a probably short-term but seemingly smart addition of two useful veterans.

But for hockey nerds, part of the fun was guessing what Barry Trotz might do with his new puzzle pieces, notably on his first line, which was discombobulated on March 11 when Anders Lee went down with a knee injury.