Sabres 5, Islanders 3: Spiraling to the finish 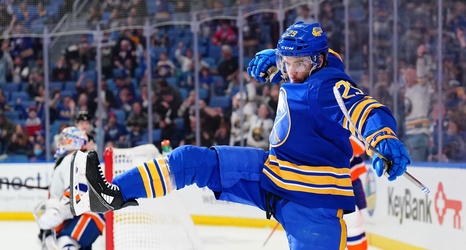 There was really nothing for the New York Islanders to take away from a mundane Saturday afternoon loss in Buffalo.

The Sabres outplayed them in extending a win streak to four games, running away with things in the second period after the Isles survived the opening period still tied 1-1.

The Isles were without J-G Pageau and Anthony Beauvillier, meaning Otto Koivula got another look and both Matt Martin and Ross Johnston were in the lineup, as were both tough-graded youngsters Kieffer Bellows (who scored) and Oliver Wahlstrom.

One wonders what things would look like now if they had been in in contention: The COVID postponements and compressed schedule is at a pressure point, with four back-to-back this month (today was the beginning of the third) and a finish of five games over the next seven days, including this one.