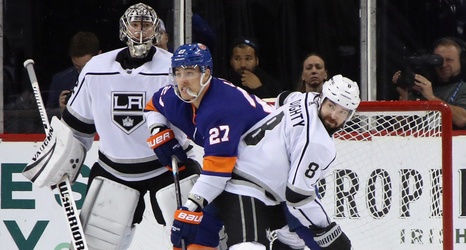 NEW YORK (AP) — Kieffer Bellows has made quite an impression for the New York Islanders in just two games in the NHL.

Bellows scored his first two goals to help the Islanders rally for a 5-3 win over the last-place Los Angeles Kings on Thursday night.

The 21-year-old left wing had an assist in his NHL debut Tuesday night in New York’s overtime win over Dallas, and is showing he could provide the offensive boost coach Barry Trotz has been seeking on the team’s third line.

“He shows you he can skate when you’re engaged and you’re working hard,” Trotz said.