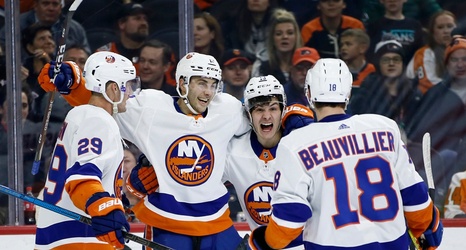 Anthony Beauvillier scored twice during a three-goal, third-period rally, and the Islanders beat the Flyers 4-3 in a shootout Saturday night in Philadelphia.

Beauvillier and Mathew Barzal combined to erase a 3-0 deficit in the final 13 minutes of regulation, and Jordan Eberle and Barzal scored in the shootout.

The Islanders are on a 13-0-1 roll that has vaulted them into second place in the Metropolitan Division behind Washington. It’s their longest stretch without a regulation loss since a 15-game run in 1982.

After getting stymied by goaltender Brian Elliott for most of the evening, the Islanders broke through when Beauvillier took advantage of the Flyers’ sloppy line change before beating Elliott.