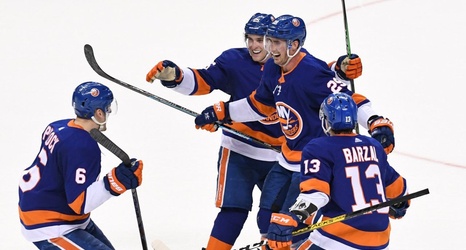 Islanders center Brock Nelson (29) celebrates with teammates after scoring to tie the game at 3-3 late in the third period against the Vancouver Canucks at Barclays Center on Saturday. Credit: Kathleen Malone-Van Dyke

Thanks for the memories from that 17-game point streak, Islanders. It was big fun . . . when was that again? Oh, right, last autumn.

That is ancient history now, with exactly two months left between their next game and their last regular-season game on April 4 – if not their last game, period, with a playoff berth far from a certainty.

The good news is this should be an entertaining ride, as evidenced by Saturday’s 4-3 overtime loss to the Canucks at Barclays Center, which allowed the Islanders to cling to third place in the Metropolitan Division with a late, point-salvaging goal.