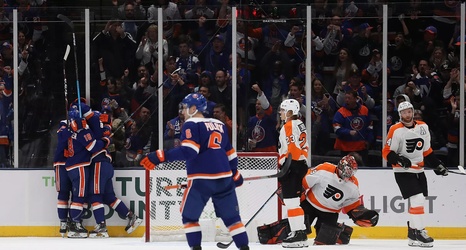 The New York Islanders visit the Philadelphia Flyers with a 13-game point streak on the line.

There also may be an exchange of K’s in the lineup for the Isles, who did not have a morning skate to help tip us off: Your goalie is Thomas Greiss. But...did Greiss tip us off to Otto Koivula making his debut?

Thomas Greiss led #Isles onto the ice, then sort of stepped aside to let Otto Koivula go first. So, maybe tonight's the night?

Leo Komarov, who returned from injury just last game, would sit if that lineup holds — though Gross later updated that Komarov took some rushes in place of Johnston.