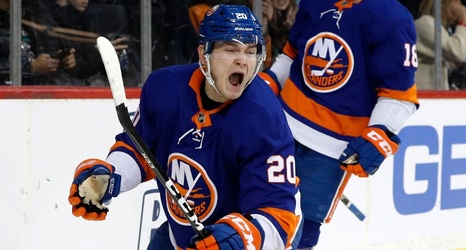 Kieffer Bellows of the Islanders celebrates his first NHL goal scored in the second period against the Los Angeles Kings at Barclays Center on Thursday, Feb. 6, 2020. Credit: Jim McIsaac

That the Islanders need more scoring from their lineup, and more balance from their four lines, has been well established.

Kieffer Bellows seems to be presenting a quick solution after being recalled from Bridgeport.

He scored his first two goals in his second NHL game, including the winner, as the Islanders twice rallied from two-goal deficits to conclude a three-game Brooklyn homestand with a 5-3 win over the Western Conference-worst Kings on Thursday night at Barclays Center.