Isles not sure on how many defensemen they'll keep 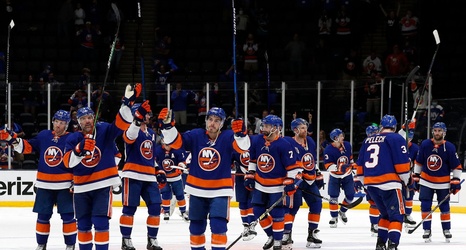 There are plenty of candidates among the defensemen at Islanders’ training camp. It’s just not clear how many jobs are available, given that the top six is defined.

The Islanders face the Flyers on Tuesday night at Wells Fargo Center after opening their six-game preseason schedule with a convincing 4-0 win over the Rangers on Sunday night at Madison Square Garden. Prospects Robin Salo and Grant Hutton, NHL veteran Erik Gustafsson, in camp on a professional tryout, and returnee Thomas Hickey were in Sunday’s lineup, vying for a roster spot. Sebastian Aho, Paul LaDue, Mitch Vande Sompel and Parker Wotherspoon are among those who may also get looks in the preseason.