Islanders slip past Flyers in shootout 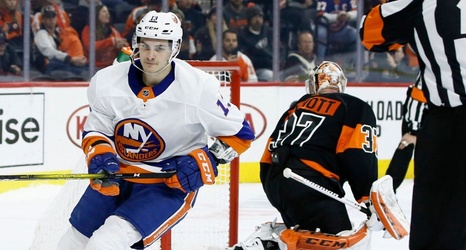 The Islanders' Mathew Barzal (13) skates by after scoring a goal against Philadelphia Flyers' Brian Elliott (37) during a shootout in an NHL hockey game on Saturday, Nov. 16, 2019, in Philadelphia. Credit: AP/Matt Slocum

PHILADELPHIA – The streak continues, even if in an unlikely scenario.

But perhaps the bigger picture is that the Islanders, on a night when they didn’t get many of the bounces they’ve gotten during their 14-game point streak, were resilient enough to erase a three-goal deficit in the third period.

Anthony Beauvillier scored twice in the third period and the Islanders are now on a 13-0-1 run after a 4-3 shootout win over the Flyers on Saturday night at Wells Fargo Center.