Islanders raise their game to rout Rangers, pull even with Caps atop East 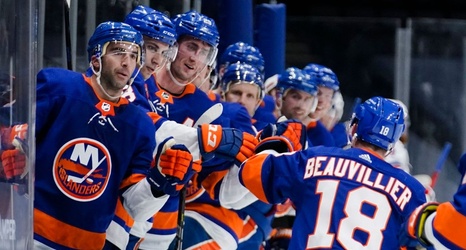 Islanders' Anthony Beauvillier (18) celebrates with teammates after scoring a goal during the second period against the Rangers on Tuesday, April 20, 2021 at Nassau Coliseum. Credit: AP/Frank Franklin II

Their struggle to score, either five-on-five or on the power play, dissipated because they were focused in the offensive zone, attacking the crease with a no-frills persistence and decisively winning their forechecks. They were structured defensively with great support from the forwards.

And, as usual, the goaltending was superb.