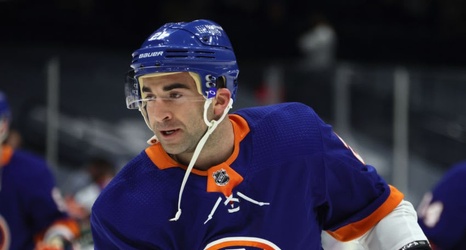 UNIONDALE, NEW YORK - APRIL 09: Kyle Palmieri #21 of the New York Islanders skates in warm-ups prior to the game against the New York Rangers at Nassau Coliseum on April 09, 2021 in Uniondale, New York. (Photo by Bruce Bennett/Getty Images)

Lou Lamoriello is like a ninja, moving swiftly and quietly in free agency as the New York Islanders GM. It’s all but officially confirmed that Kyle Palmieri, Zach Parise, and Casey Cizikas have a deal with the Islanders we’re just not sure what those contracts actually are yet.

What I wanted to do was take a look at Kyle Palmieri specifically and see if I could predict what kind of a deal he’s getting based on context clues and other deals signed in the offseason.