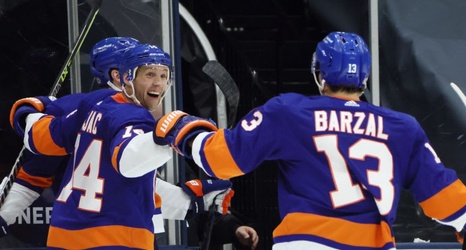 UNIONDALE, NEW YORK - APRIL 11: Travis Zajac #14 of the New York Islanders celebrates an Islander overtime victory over the New York Rangers at the Nassau Coliseum on April 11, 2021 in Uniondale, New York. The Islanders defeated the Rangers 3-2 in overtime. (Photo by Bruce Bennett/Getty Images)

In last night’s 4-1 loss to the Boston Bruins, the New York Islanders bench was left short with two players missing due to injuries. Josh Bailey left mid-way through the second period for as of yet unknown reasons and Cal Clutterbuck retreated to the dressing room after going face-first into the boards in the third period.