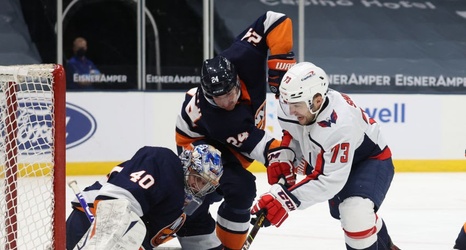 UNIONDALE, NEW YORK - APRIL 06: Semyon Varlamov #40 of the New York Islanders makes a save against Conor Sheary #73 of the Washington Capitals during their game at Nassau Coliseum on April 06, 2021 in Uniondale, New York. (Photo by Al Bello/Getty Images)

Coming off a dominant 6-1 performance against the New York Rangers, the Islanders have a huge series coming up against the Washington Capitals. Both teams are tied up top with 62 points and have a three-game set this weekend.

With 10 games remaining, these three games could decide the division. So far this year, the Islanders are 2-3 against them.