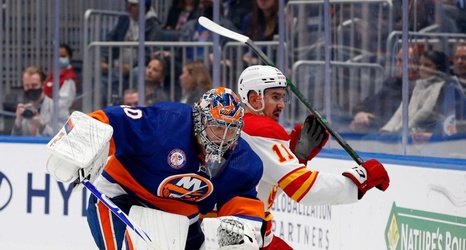 The $1.1 billion UBS Arena delivered on its promise of being the state-of-the-art home the Islanders have long sought. That’s great for the franchise’s long-term outlook. Short term, things are a little murky as the team deals with a COVID-19 outbreak.

The Islanders, despite a makeshift lineup, were energized in christening their new home as Brock Nelson scored twice in the team’s best performance of late. Still, their losing streak grew to five games as the Flames won, 5-2, before a loud, sellout crowd of 17,255, the final score inflated by two empty-net goals.

The last-place Islanders (5-7-2), who opened the season with a 13-game road trip, have allowed at least four goals in each of the five losses and have been outscored, 24-6.