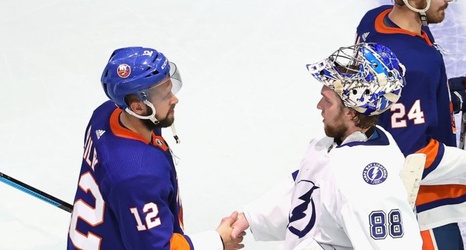 EDMONTON, ALBERTA - SEPTEMBER 17: Josh Bailey #12 of the New York Islanders and Andrei Vasilevskiy #88 of the Tampa Bay Lightning shake hands following the Lightning's series win over the Islanders in Game Six of the Eastern Conference Final during the 2020 NHL Stanley Cup Playoffs at Rogers Place on September 17, 2020 in Edmonton, Alberta, Canada. (Photo by Bruce Bennett/Getty Images)

With the Vegas Golden Knights win last night over the Colorado Avalanche, the final piece of the final four was sealed. And he second the final buzzer sounded in Game 6 between the Knights and Avalanche the NHL, and the New York Islanders released the schedule for the semi-final round.