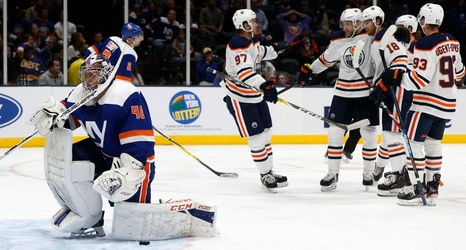 Semyon Varlamov #40 of the slanders looks on as James Neal #18 of the Edmonton Oilers celebrates his second period goal with his teammates at NYCB Live on Tuesday, Oct. 8, 2019. Photo Credit: Jim McIsaac

It couldn’t have looked, or gone, worse for the Islanders on Tuesday night.

James Neal scored four goals, two on the power play, for the Oilers in their 5-2 win at NYCB Live’s Nassau Coliseum. The defense, the goaltending and the physical play were all too soft for the Islanders as they concluded a season-opening three-game homestand.

It’s way too soon to make long-term proclamations on the Islanders’ season.