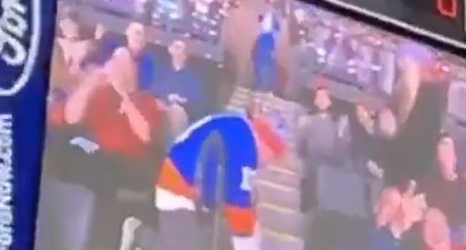 One Islanders fan used the arena “Kiss Cam” to play a cruel joke on his date Thursday, likely earning him a trip to the penalty box.

The unidentified fan, sporting a Mat Barzal jersey, kissed the woman next to him after appearing on the Nassau Coliseum jumbotron and then stepped into the aisle and got down on one knee as if he was about to propose.

The woman stood up, and appeared amazed but instead of producing a ring, the man just tied his shoes. The Islanders ended up losing to the Devils, 2-1.