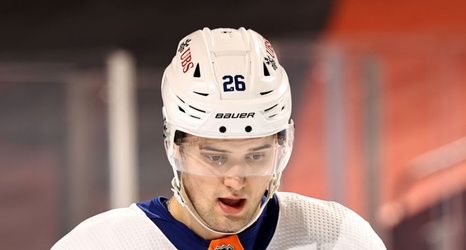 PHILADELPHIA, PENNSYLVANIA - JANUARY 30: Oliver Wahlstrom #26 of the New York Islanders looks on during a time out in the first period against the Philadelphia Flyers at Wells Fargo Center on January 30, 2021 in Philadelphia, Pennsylvania. (Photo by Elsa/Getty Images)

With a goal against the New Jersey Devils on Tuesday, New York Islanders rookie Oliver Wahlstrom now has points in five straight games. With six points (three goals and three assists) in those five games, Wahlstrom is up to eight points on the season.

The excitement his play has generated now has fans looking at the Calder trophy odds and wondering why their rookie isn’t in the mix for the award.