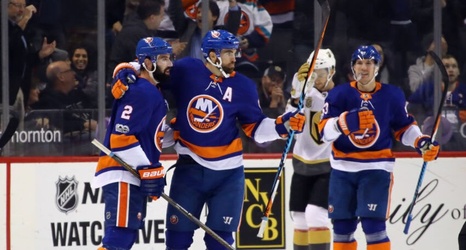 NEW YORK, NY - OCTOBER 30: Andrew Ladd #16 of the New York Islanders (c) celebrates his goal at 13:50 of the first period against the Vegas Golden Knights and is joined by Nick Leddy #2 (l) and Casey Cizikas #53 (r) at the Barclays Center on October 30, 2017 in the Brooklyn borough of New York City. (Photo by Bruce Bennett/Getty Images)

On Friday, the New York Islanders did the unthinkable. They were able to successfully trade Andrew Ladd. And they did so without having to shed a first-round pick. Something that seemed like a pre-requisite just a few days ago.