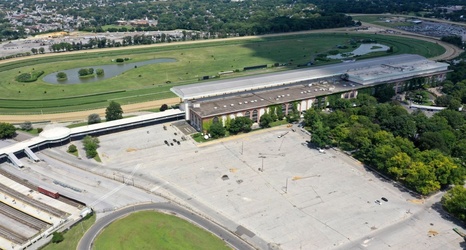 An aerial view on Friday of a parking lot near the Belmont racetrack where an Islanders arena will be built. Photo Credit: Yeong-Ung Yang

The Islanders’ $1.3 billion arena and entertainment plan received its final municipal approval on Tuesday, clearing the way for the developers to potentially begin construction at Belmont in a matter of weeks.

The Franchise Oversight Board, a state agency that oversees the New York Racing Association and all activity at Belmont, issued a series of approvals on the project at a meeting in Albany on Tuesday afternoon.

While the approvals were largely expected to pass without issue, it is important because it represents the final state board that needed to officially sign off on the project before the developers can move forward toward a groundbreaking ceremony.