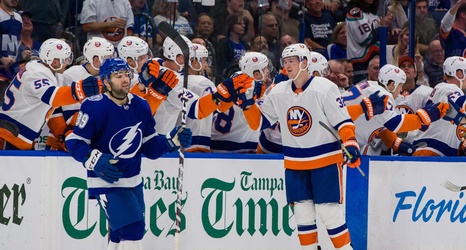 The Islanders continued their trip through the southeast in Tampa Bay. The Lightning haven’t been the powerhouse they were last season. But they’re still a strong team, as evidenced by their 7-1 thumping of the Sharks on Saturday night. Semyon Varlamov had to be on his A-game, and he was.

His competition was Curtis McElhinney, whom, you’ll remember, stepped in for Petr Mrazek last spring for the Hurricanes in the Second Round series and shut the door. It took an unlikely icebreaker to open the door for the Islanders, but the result was a comfortable 5-1 win.