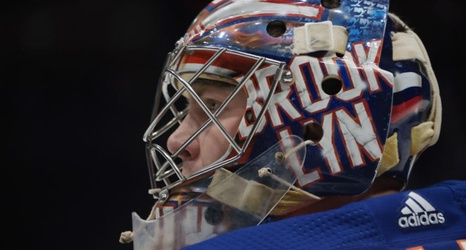 UNIONDALE, NEW YORK - MARCH 18: Semyon Varlamov #40 of the New York Islanders skates in warm-ups prior to the game against the Philadelphia Flyers at the Nassau Coliseum on March 18, 2021 in Uniondale, New York. (Photo by Bruce Bennett/Getty Images)

With three games left, the Islanders are in action against the New Jersey Devils as they fight for playoff positioning. So far, the Isles hold a 5-1 record against New Jersey this year, and hope for that success to continue.

Going in to play today, the Islanders sit in fourth just one point back of Boston and five points back of Pittsburgh and Washington.