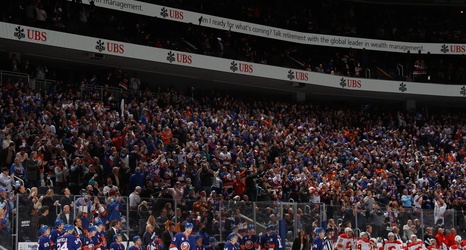 The New York Islanders did not have anything close to the lineup they imagined when they marked their calendar for a Nov. 20 home opener of UBS Arena. But the lineup they did dress against the Calgary Flames — with four players making their debut, and several key regulars out — mounted a strong effort befitting the occasion.

The 5-2 loss, inflated by two late empty-net goals, takes some of the shine off but doesn’t dilute the significance of this long-awaited moment for the franchise.

On the ice, the Isles fell behind 2-0 thanks to a bad turnover — from a longtime Islander — and a power play goal, but they got one back before the end of the first and made a game of it throughout.