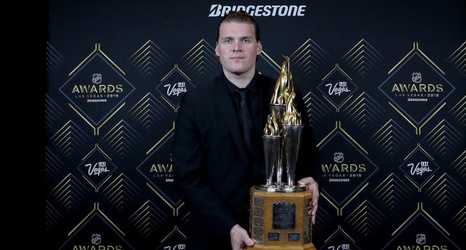 It may be the offseason, but former Islanders goaltender Robin Lehner still needs one more big save.

On Saturday the 28-year-old Swede tweeted a picture of what appears to be the replica Masterton Trophy — awarded to the “player who best exemplifies the qualities of perseverance, sportsmanship, and dedication to ice hockey” — he won at the NHL Awards ceremony earlier this summer.

But the inscription reads “New York Rangers,” rather than “New York Islanders.”

“You had one job …” Lehner wrote beneath the photo.

Lehner, who signed a one-year, $5 million contract with the Blackhawks this offseason after negotiations with the Islanders mysteriously fell apart, won the prestigious award for fighting his way back from mental illness and substance abuse.