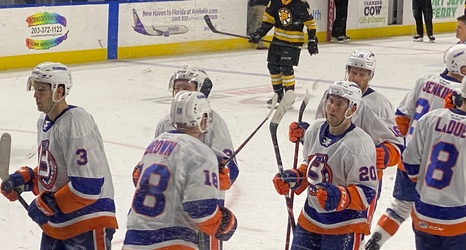 The Bridgeport Islanders split their two-game home stand this past weekend, ending their three-game winning streak.

Saturday, the Islanders overcame a two-goal deficit to defeat the Providence Bruins, 6-4. Otto Koivula extended his scoring streak to five games with his first goal of the season and an assist. Blade Jenkins, Simon Holmstrom and Richard Panik all netted their first goals of the season.

Holmstrom also had two helpers, extending his point streak to three games. The 2019 first-round pick’s goal was a thing of beauty. He got a little bit of a break as the Bruins defenseman lost his footing, giving Holmstrom a clear path to the net where his deked out goalie Kyle Keyser, putting the puck top shelf to cut the Providence lead to one.