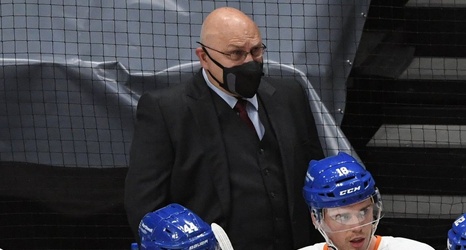 Mathew Barzal’s usual right wing, Jordan Eberle, was given the night off to rest. That afforded Islanders coach Barry Trotz the chance to try two other intriguing top-line possibilities.

But neither rookie sharpshooter Oliver Wahlstrom nor Kyle Palmieri made the most of the opportunity in Thursday night’s 2-1 loss to the Devils at Nassau Coliseum.

Palmieri was in Eberle’s usual spot for the first two periods but while he was credited for three shots and five hits, Trotz switched his lines in the third period, moving Wahlstrom and Jean-Gabriel Pageau to Barzal’s wings.

"I did," Trotz said when asked whether he wanted to take another look at Palmieri with Barzal.