Who starts at QB on Sunday for the Giants? 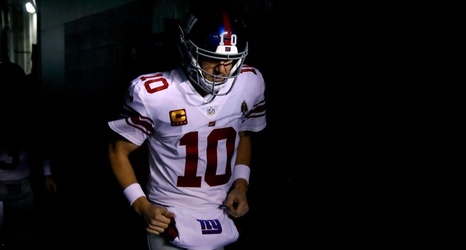 The Giants' Eli Manning runs onto the field before an NFL game against the Philadelphia Eagles, Monday, Dec. 9, 2019, in Philadelphia. Credit: AP/Matt Rourke

Pat Shurmur said he wants to see how Daniel Jones is able to “move around” in practices this week before deciding who will start at quarterback for the Giants on Sunday.

Jones missed Monday’s game because of a moderate high ankle sprain, and Eli Manning started in his place for the 23-17 loss to the Eagles. The NFL Network reported over the weekend that Jones would miss two to four weeks with the injury and that Manning will start – in what could be his final home game as a Giant – on Sunday against the Dolphins.