The complexity of understanding Leonard Williams' productivity for the Giants 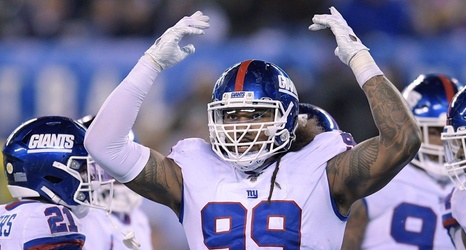 Giants defensive end Leonard Williams motions after a play against the Dallas Cowboys during the fourth quarter against Nov. 4, 2019. Credit: AP/Bill Kostroun

PHILADELPHIA – Just as it was with the Jets, Leonard Williams’ greatest strengths with the Giants lie in areas not always quantifiable by the usual measures to judge a defensive lineman.

There still are no sacks this season for the 25-year-old Williams, who was traded from the Jets on Oct. 28 in exchange for a third-round pick next year and a fifth-rounder in 2021. The fifth-rounder would become a fourth if Williams re-signs with the Giants before next season.