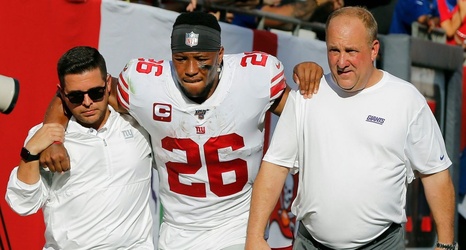 Giants running back Saquon Barkley gets helped off the field after getting hurt against the Buccaneers during the first half on Sunday in Tampa, Fla. Photo Credit: AP/Mark LoMoglio

Saquon Barkley had to be helped off the Giants sideline and into the locker room late in the first half of Sunday’s game against the Bucs after suffering what appeared to be a significant right ankle injury.

The Giants running back caught a pass in front of the Giants’ bench for a gain of six yards and was hit out of bounds on the play. He immediately began hopping on his left leg, unable to put weight on the right.