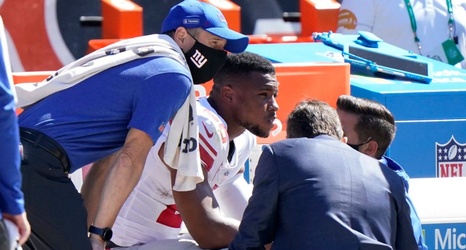 Giants running back Saquon Barkley is attended to by medical staff after being injured against the Bears in Chicago on Sept. 20, 2020. Credit: AP/Nam Y. Huh

When the Giants trickled off the field immediately following Sunday’s loss to the Bears, they were met outside their locker room by someone they were not expecting to be there.

Then again, maybe they weren’t surprised. Not if they know Saquon Barkley.

"He was the first guy we saw in the locker room waiting in the tunnel after he just had a devastating injury receiving some real tough news," Daniel Jones recalled of the scene at Soldier Field, the running back on his crutches, the team just having lost on the final play of the game.