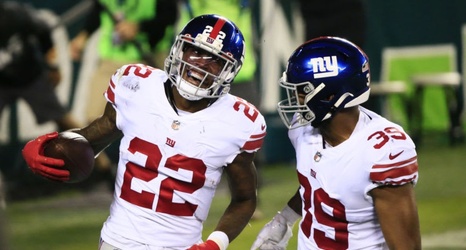 PHILADELPHIA, PA - OCTOBER 22: Wayne Gallman #22 of the New York Giants smiles with teammate Elijhaa Penny #39 after a touchdown score during the third quarter against the Philadelphia Eagles at Lincoln Financial Field on October 22, 2020 in Philadelphia, Pennsylvania. (Photo by Corey Perrine/Getty Images)

Wayne Gallman has served as the change-of-pace back for four years. The NY Giants should give him a look as a starter before checking to see where he can go.

It could be because the Philadelphia Eagles defense is atrocious, it could be frustration at his own team playing poorly, but, with starter Devonte Freeman, who wasn’t even on the team a few weeks ago, knocked out with an injury, Wayne Gallman stepped up and played with an edge in Thursday’s game.